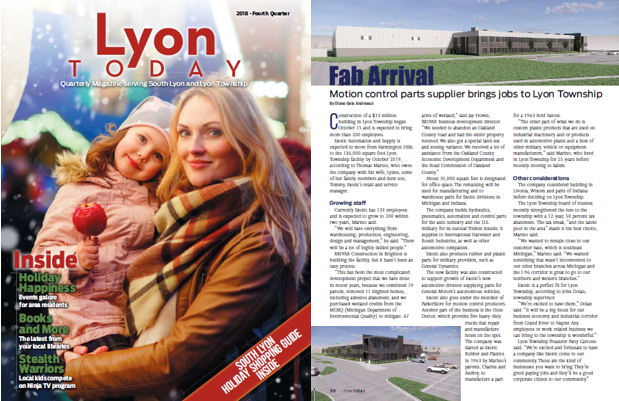 Construction of a $13 million building in Lyon Township began October 15 and is expected to bring more than 200 employees.

Exotic Automation and Supply is expected to move from Farmington Hills to the 136,000-square-foot Lyon Township facility by October 2019, according to Thomas Marino, who owns the company with his wife, Lynne, some of her family members and their son, Tommy, Exotic’s retail and service manager.

Currently Exotic has 133 employees and is expected to grow to 200 within two years, Marino said.

“We will have everything from warehousing, production, engineering, design and management,” he said. “There will be a lot of highly skilled people.”

BRIVAR Construction in Brighton is building the facility, but it hasn’t been an easy process.

“This has been the most complicated development project that we have done in recent years, because we combined 19 parcels, removed 11 blighted homes, including asbestos abatement, and we purchased wetland credits from the MDEQ (Michigan Department of Environmental Quality) to mitigate .67 acres of wetland,” said Jay Howie, BRIVAR business development director. “We needed to abandon an Oakland County road and had the entire property rezoned. We also got a special land use and zoning variance. We received a lot of assistance from the Oakland County Economic Development Department and the Road Commission of Oakland County.”

About 35,000 square feet is designated for office space. The remaining will be used for manufacturing and to warehouse parts for Exotic divisions in Michigan and Indiana.

The company builds hydraulics, pneumatics, automation and control parts for the auto industry and the U.S. military for its nuclear Trident missile. It supplies to International Harvester and Roush Industries, as well as other automotive companies.

Exotic also goes under the moniker of ParkerStore for motion control producers. Another part of the business is the Hose Doctor, which provides five heavy-duty trucks that repair and manufacture hoses on the spot. The company was started as Exotic Rubber and Plastics in 1963 by Marino’s parents, Charles and Audrey, to manufacture a part for a 1963 Ford Falcon.

“The other part of what we do is custom plastic products that are used on industrial machinery and or products used in automotive plants and a host of other military, vehicle or equipment manufacturers,” said Marino, who lived in Lyon Township for 25 years before recently moving to Salem.

The company considered building in Livonia, Wixom and parts of Indiana before deciding on Lyon Township.

The Lyon Township board of trustees recently strengthened the lure to the township with a 12-year, 50 percent tax abatement. The tax break, “and the talent pool in the area” made it the best choice, Marino said.

“We wanted to remain close to our customer base, which is southeast Michigan,” Marino said. “We wanted something that wasn’t inconvenient to our other branches across Michigan and the I-96 corridor is great to go to our northern and western branches.”

Exotic is a perfect fit for Lyon Township, according to John Dolan, township supervisor.

“We’re excited to have them,” Dolan said. “It will be a big boost for our business economy and industrial corridor from Grand River to Napier. Any employees or work-related business we can bring to the township is wonderful.”

Lyon Township Treasurer Patty Carcone said, “We’re excited and fortunate to have a company like Exotic come to our community. Those are the kind of businesses you want to bring. They’re good-paying jobs and they’ll be a good corporate citizen to our community.”